We can divide parts of speech in Spanish into nine different types. Let's idetify them first:

Nouns are names of things, places, ideas/concepts, or people.

Articles - definite and indefinite define the status of the noun.

Click here to learn more about Nouns and Articles in Spanish

Pronouns are words we use to replace nouns. Pronouns carry the same number and gender as the noun they replace.

There are many different pronouns, for example:

Verbs express an action or state that the subject of the sentence performs. In Spanish, there are regular and irregular verbs, and many different verb tenses which you can learn in our Grammar section.

Adjectives describe and give extra information about nouns. There are descriptive adjectives such as “tonto”, “grande”, and limiting adjectives such as “este”, “aquel”, “cinco”, “mi”, “la”, “los”, etc. Adjectives must agree in number and gender with the noun, so adjectives have different forms. For example: “bueno”, “buena”, “buenos”, “buenas”, “mejor”, “el mejor”.

Click here to learn more about Adjectives in Spanish

Adverbs describe or give extra information about a verb, an adjective or another adverb. There are many different type of adverbs:

It is important to know that adverbs can have comparative and superlative forms, as well as diminutive forms.

Click here to learn more about Adverbs in Spanish

Prepositions are used to show the relationship between items in the sentence. For instance, these are some of the prepositions you can learn in Spanish:

There are prepositions of time, place, direction, sequence, etc.

Click here to learn more about Prepositions in Spanish

Conjunctions are linkers we use to make sentences and paragraphs more cohesive and natural. The most common ones are y (and) and pero (but). Other common ones are: de manera que, así que, etc.

Interjections are exclamations and sounds one make when speaking to express a certain reaction or emotion:

Read the following sentences. Choose the option that best describes the word that is in bold.

Covered in this lesson: Parts of Speech in Spanish - to form sentences in Spanish learn how to use each of them in the correct order.

Click below to register for a free class with no obligation - no credit card needed. 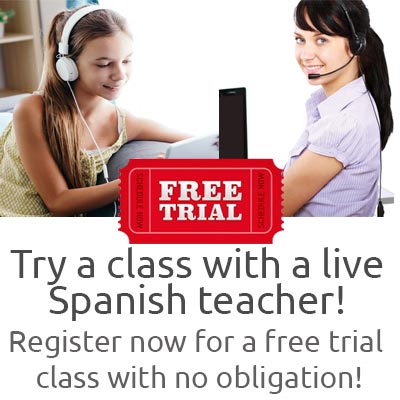 Learning with your own live Spanish teacher is the best way to master the language!

1 A guide to Spanish pronunciation

8 Parts of Speech in Spanish

16 The Numbers in Spanish

25 The Imperative in Spanish

36 The preterite tense in Spanish grammar

38 Verbs that change meaning in preterite

41 A review of the preterite tense